Why surreal design is back

In 1916, in the midst of World War I, Giorgio de Chirico returned from Paris to Italy and began painting rooms filled with incongruous objects. It was a departure for an artist known for his eerie street scenes and model portraits. In “The Jewish Angel”, made the same year, drawing tools such as tri-squares and measuring sticks are stacked on top of each other to create an imposing shape, topped by a drawing of a single eye. on a piece of paper, looking at the viewer. The painting is thought to be an abstract portrait of de Chirico’s father, who worked as a railway engineer.

Using everyday objects to give physical form to an unconscious sensation, De Chirico seeded the ideas that would shape the surrealist movement (from on or above reality), as defined by a group of French poets, led by André Breton, a decade later. Through their automatic writing, their poetry and their painting, the surrealists pioneered a way of thinking that valued “the illumination of hidden places” in the mind and “the progressive obscuring of other places, the perpetual excursion into the middle of forbidden territory. This is all part of the search for greater intellectual freedom.

In the decades since the first Surrealist manifestos were published in 1924, the twisted and distorted objects that artists depicted, such as fireplaces, rocking horses and clocks, danced off the canvas and into the material world. . It started with sculpture – with Dalí’s lobster telephone and Dorothea Tanning’s Pincushion to Serve as Fetish – and then spread to commercial design, as the aesthetic was co-opted by fashion and furniture designers, architects and graphic designers.

Now surreal design is experiencing another moment. It has come back into the zeitgeist thanks to the revival of Elsa Schiaparelli’s eponymous fashion house and the proliferation of distorted and wobbly architecture that seems to defy the laws of physics, as in The Imprint building in Seoul. in 2018. And it’s the subject of a major exhibition at the Design Museum in London this fall called Objects of Desire. The question today is the same as then: can the radical spirit of surrealism survive commercialization?

In 1926, Breton and Louis Aragon stormed the Paris premiere of the Ballets Russes. Romeo and Juliet, whose costumes Max Ernst and Jean Miró had designed, to protest against the commercialization of the movement. Something similar seems unlikely today.

The first surrealist design was able to criticize a society increasingly in the grip of consumerism by diverting everyday objects such as the telephone. Contemporary designers have tapped into this spirit by producing works that occupy space that is imaginary rather than real – and therefore marketable.

London studio Dunne and Raby, whose work is included in the Design Museum exhibition, creates ‘fictitious’ and ‘impossible’ objects to stimulate discussion around new technologies. For his 2010 project, “Between Reality And The Impossible,” he designed dystopian gimmicks and photographed them in staged scenes that speculate on various undesirable futures. In one, foragers in a food-scarce Britain rummage through suburban habitats. They are dressed in neon protective suits and wear tubular DIY devices seeking “urban nutrition”. In another, police are performing “scans” designed to detect suspicious brain waves in suspected criminals. The photographs were taken in real environments, but the futuristic and sinister costumes and props give the series an eerie and disturbing quality.

In its furniture, Swedish design studio Front evokes strangeness as a way to probe our relationship to our possessions, creating “unexpected reflections of how objects relate to the world around us”, as the designer puts it. -founder Sofia Lagerkvist. Front’s horse lamp, also featured in the Design Museum exhibit, sits on a shade atop the head of a life-size molded horse, creating the impression that a mythical apparition is lighting up the room. Co-founder Anna Lindgren says the lamp inspires people to “remember their fascination with the forest they had as children”. But, by tapping into the nostalgia of a pastoral childhood, real or imagined, the horse lamp arguably sparks little fantasies rather than revealing anything beneath the surface of the mind. It seems an ornamental and safe version of surreality.

For its Anomaly range, Front has stretched flesh-colored pink leather over nugget shapes with chunky trotters as legs. These seats and footstools are intended to be “objects to arouse your curiosity, your affection or perhaps even your repulsion”. “We were curious about how we read a new object and relate it to our previous experiences and references,” says Lindgren, who says the Anomaly line gets a slew of reactions. “A lot of people stroke the stool like it’s an animal. Some laugh. Some find it cute and some associate it with aliens, tumors or growths on a body. Causing these reactions visceral, chairs point us to our unconscious phobias or fetishes.(I find chairs look like breasts; my boyfriend said they look like scamorza affumicata, the smoked Italian cheese.) 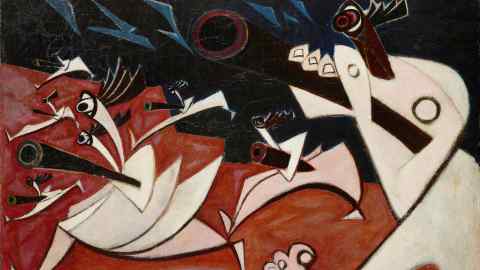 The quality of surreality is not necessarily visual, however. It can also be atmospheric or behavioral. Bureau Spectacular, a Los Angeles-based design firm, aims to use architecture and product design as a medium for storytelling, inspired in part by the dreamlike paintings of 15th-century Dutch artist Hieronymus Bosch. “Once we look at the paintings, we can question our own reality,” says founder Jimenez Lai. His furniture collection Shadows of Things We Wished We Had attempts to make invisible dynamics visible. A sofa, for example, is taller on one side than the other, with a smooth, slide-like curve connecting the two tiers. It is part peach pink and part abyss blue, the sexual colors are not involuntary.

“I was thinking about the dynamic of two people sitting together,” Lai says. “If you can’t sit on the same level as someone, what does that do to the relationship?” There is a function, he believes, “in thinking about the kinds of stories we can tell and the kinds of things we can build into reality that change our realities a little bit.” The sofa is an elegant and attractive object, but it can also make something unconscious conscious.

The incongruous and isolated part of the body, Surrealism’s most ubiquitous influence on contemporary design, can be traced back to one of the movement’s earliest objects: the Mae West Lips sofa. Designed by Salvador Dalí in 1938, it was inspired by his idol Sigmund Freud (who did not return admiration, considering the surrealists to be “nuts”) and Freud’s idea that in a dream a room symbolizes a woman. Dalí painted a large room to resemble the face of Hollywood icon Mae West, his paradigm of feminine beauty, making her lips the couch. It was his patron Edward James who suggested Dalí create a physical version of the seat for his surreal design project Monkton House, West Sussex.

The red woolen and the black tasselled fringes of Dalí’s sofa, however, take on a set of darker meanings in light of James’ comment that the fringes were chosen “to resemble the embroidery on a picador’s shoulder pads or the breeches and a toreador’s hat”. Dalí also revealed that the shape was inspired by “particularly uncomfortable rocks” near his home in Cadaques, Spain. The dream-symbol of perfect femininity is therefore in fact the rendering of a provocative seductress, seductive but inhospitable. It is a Freudian symbol of another kind, perhaps involuntary: the perfect woman who provokes murderous aggression in her observer (as the bullfighter does the bull) is also a description of the Oedipus complex.

Some of the sofa’s successors do not live up to the intentions of their creators. This summer, Daniel Roseberry de Schiaparelli imagined a series of belts studded with “surreal anatomical details”: golden noses and ears with breasts for lobes. Playful and beautiful, bizarre and intriguing, they testify to Roseberry’s skill in designing irreverent and witty yet elegant clothing. But in the face of the Surrealists’ founding impulse to ridicule commodity culture and question the structures of desire and consumption upon which the modern economy rests, they fall flat. They distract from reality, but ultimately lead nowhere.

Can an object explicitly meant to be bought and used also be a radical statement? The early Surrealists argued that painting and sculpture were not sufficiently immediate mediums to allow pure expression of the subconscious (they preferred writing). According to this standard, an object designed for the market would be even less so. But an object or an image can snag something deep in the recesses of the mind. Dunne and Raby’s eerie futuristic visions, which allow us to explore unsettling situations from a safe place, or Front’s Anomaly chairs, which expose our unconscious associations, testify to this. At its best, contemporary design of this type is reminiscent of the Surrealists’ original excursion into forbidden territories and the illumination of what is hidden.

“Objects of Desire: Surrealism and Design 1924-Today” is at the Design Museum in London from October 14 to February 19