The great rising figures of the Simmons at the First Interstate Center for the arts.

Sthe obvious may have brought them together, but art was the welding link between life and livelihood for Bill and Karma Simmons for three decades.

Shortly after meeting at a mutual friend’s card game, Bill invited Karma to dinner – his last name was Lloyd at the time – and remembers asking him: “Are you the kind of someone who could quit your job and just go sailing or something?”

“In the blink of an eye,” she recalled responding. 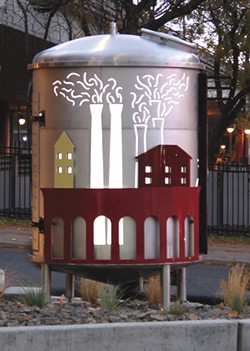 A work titled ‘Powerhouse’ which can be seen at the Lincoln Street I-90 westbound exit ramp.

Six months later, they set sail, traveling from Canada to Mexico, dreaming of a life made of art.

“We started designing this place while we were ‘on the road’ in Mexico,” Karma says of the barn-like structure they built around 1998 to match an existing home on the Valleyford property. where Bill’s parents lived. 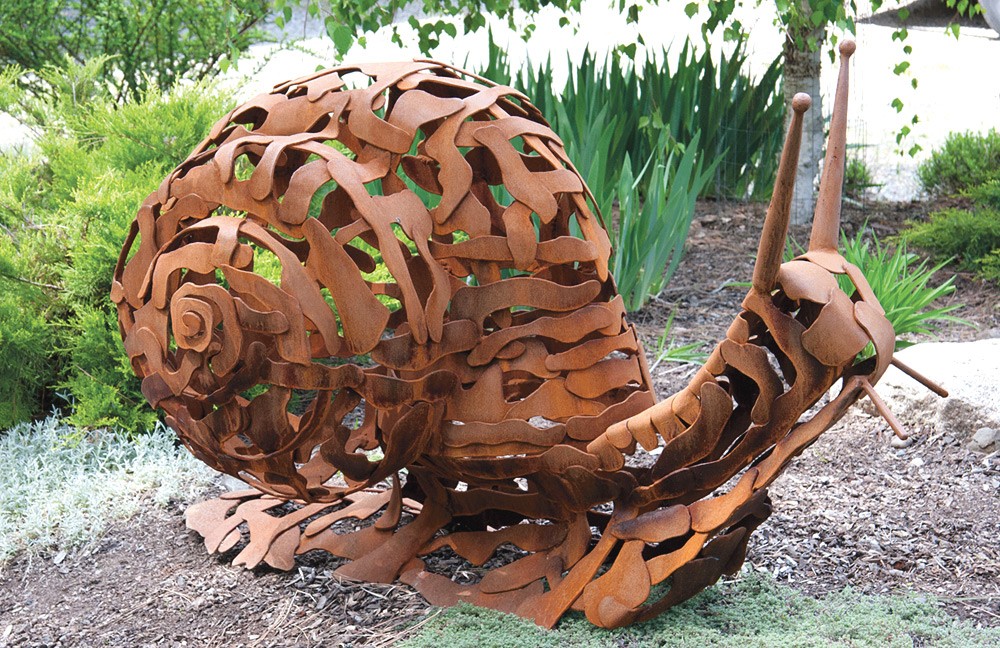 The barn is divided between the artist’s studio overlooking the road and the couple’s living space at the rear of the building, accessed by a sloping gravel path.

“The studio has 16-foot ceilings,” says Bill, explaining how their loft bedroom and office were an afterthought in the home’s initial design process, but made possible by the barn’s exceptionally high ceilings.

A downstairs bedroom is in the works, “because we’re getting older,” Bill adds with a laugh.

The ground floor is an open-plan living space, brightly lit and full of plants and artwork, some of which belong to Karma, but mostly what the couple have collected. 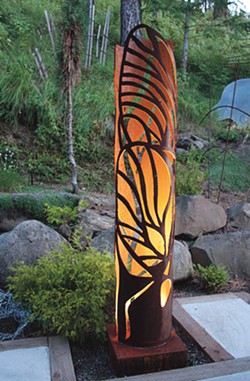 The kitchen has an enviably sized curved island, a rolling metal table from the old Swackhammer restaurant, and other furniture that — like almost everything in their home — the Simmons either repurposed or made themselves.

‘We knew we wanted to do art,’ says Bill, who once owned an auto body shop and has no formal art training, but built much of the couple’s home, including the one-of-a-kind walls. in wood and mortar from the studio.

The Simmons thought functional art, especially furniture, was their best way to make a living, but it was nearly impossible to do so, says Karma, who grew up in Spokane, attended Spokane Falls Community College, then moved to pursue his associate’s degree. in credit and financial management. 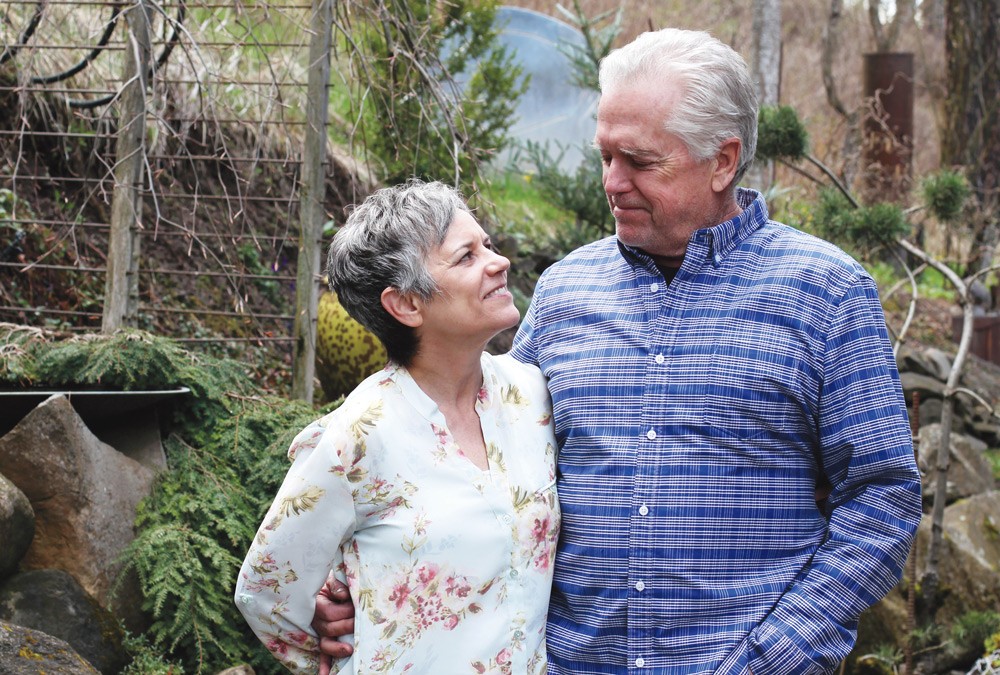 “It’s not impossible,” she corrects herself. “It’s very difficult.”

So the couple got together. Although they continued to make furniture, as well as architectural features like fences, screens, and column lamps outside their home, the Simmons mostly made large-scale sculpture like beer tank at the foot of the I-90 westbound Lincoln St. exit ramp.

Pool day at the Comstock Aquatic Center features a woman and two children, whom the locals occasionally “dress” in clothes. Before they install Pool daysays Karma, they brought the “mom” sculpture to ArtFest, where the late sister Paula Turnbull stopped to admire it.

Bill and Karma Simmons live and work in this studio, with its unique cordwood and mortar wall.

“It was the cutest thing,” Karma says, recalling how Turnbull, a revered sculptor, patted the sculpture on the back, remarking, “She’s got a good ass.”

The Simmons’ largest and newest play, Opening act, hovers inside the First Interstate Center for the Arts. It consists of three massive hands of welded aluminum, similar to mesh, from which hang four dancing figures of different colors.

Typically, the Simmons’ art-making process begins with a drawing created on Sketchup software. “It allows me to take measurements from all sides and angles,” says Bill, who does most of the manufacturing.Then they figure out how they will construct the sculpture, sometimes working solidly, like an actual dragonfly destined to adorn a Spokane Valley roundabout. A massive cowboy constructed in two parts uses internally welded organic shaped jigs to create the hollow shape. 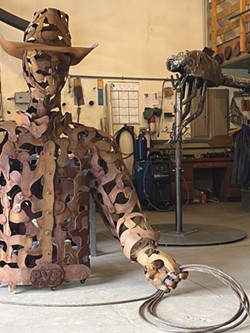 This giant cowboy is a work in progress.

Both projects are visible from the couple’s living space directly above and adjacent to the studio but separated by a wall of safety glass. It is from this point of view that they reflect on their working day over a cup of coffee or a glass of wine.

“Together,” Bill and Karma say in unison.

Learn about the giant pencil sculpture on ...