A Qatari sheikh linked to the royal family has sensationally accused one of Britain’s most respected art dealers of selling him £4.5million worth of antiques he claims are fakes.

The Sheikh is suing Mr Eskenazi in the High Court for reimbursement of the seven works, which include a £1.14million statue of the Greek god Dionysus.

But in court documents seen by The Mail on Sunday, Mr Eskenazi dismisses Sheik al-Thani’s allegations as “reprehensible” and “odious” and says they threaten to ruin his business and his reputation.

Sheik al-Thani is a leading figure in British horse racing and senior members of the royal family, including the king and late queen, have been guests at his £330million Mayfair mansion. In 2014, his investment company, Qipco, was chosen as Royal Ascot’s first commercial sponsor.

Mr Eskenazi, 73, has supplied pieces to wealthy private clients and institutions around the world, including the British Museum and the V&A, and said: ‘Despite the disparity in our comparative financial resources, I will not be bullied into giving up everything I’ve built.”

The High Court trial is set to resume as early as this week, after hearings begin this summer.

It comes as the sheikh prepares to sell priceless treasures from the Al-Thani family’s former Paris mansion, the Hotel Lambert, in a multi-million pound auction at Sotheby’s this month.

Mr Eskenazi first met the Sheik in early 2014 at the west London gallery he runs with his wife Fausta, an Italian aristocrat. While admitting he was a “newbie” to antiques, the sheikh purchased seven pieces through Qipco. 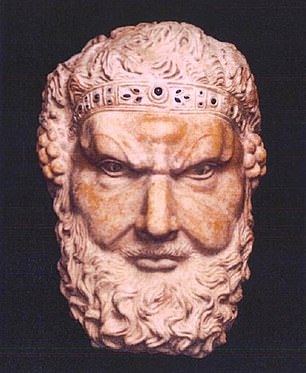 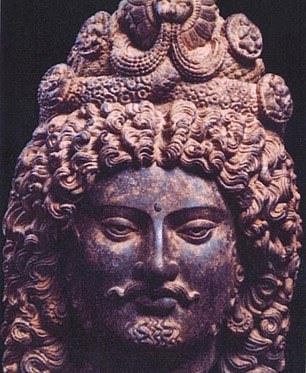 The items included the marble head of the god Dionysus (left) and a £655,000 sculpture of the head of a Buddhist bodhisattva deity (right)

The items included the marble head of the god Dionysus, a £655,000 sculpture of the head of a Buddhist deity Bodhisattva, a £112,000 gold serpent bracelet encrusted with turquoise and garnet and a £1.97million statue of £ of the Hindu deity Harihara.

Court documents submitted on behalf of the sheikh indicate that he became suspicious the following year. Experts tasked with examining the pieces concluded that there was evidence of modern materials in artifacts believed to date from 100 BC.

The Sheik summoned Mr Eskenazi to a tense meeting at his Park Lane home, Dudley House, to tell him the coins were ‘problematic’.

Sheikh al-Thani told the court he used the word ‘problematic’ to spare Mr Eskenazi’s feelings: ‘It means wrong, but in very polite terms… I didn’t want it to be very upset… I wanted to protect his reputation, really.

According to the documents, conservation scientist Dr Anna Bennett described the head of Krodha, a wrathful deity, as “a head made of random particles, including modern metals and bits of modern plastic, held together by a organic binder”.

Experts giving evidence for Mr Eskenazi said any modern materials on the objects were likely due to the restoration process and he continued to believe they were genuine. 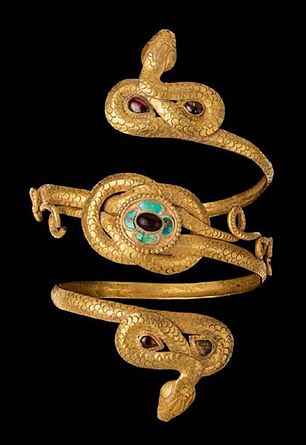 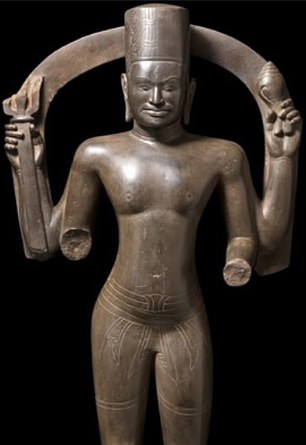 They also included an £112,000 gold snake bracelet encrusted with turquoise and garnet, and a £1.97million statue of the Hindu deity Harihara.

Mr Eskenazi, the son of wealthy oriental art dealer Victor Eskenazi, told the court he believed the sheikh was simply “tired” of the pieces. “It concerns me deeply that by doing this he is seeking to undermine an impeccable reputation that I have built over the course of a lifetime’s work.”

Sheikh al-Thani, who denies this, said: “Given my duty to Qipco and the Al Thani collection, and under circumstances where Mr. Eskenazi was in fact not – as he told me – willing to refund the coins if we received reports that they were inauthentic, legal action had to be taken.

He also sued Phoenix Ancient Art, of New York and Geneva, claiming he sold them fake statues, but lost an appeal over his claim this year.

Sheikh al-Thani, the cousin of the Emir of Qatar, entertained the then Queen, Prince Philip and Prince Charles at elaborate dinner parties at Dudley House, said to be Britain’s most expensive private home. Brittany. The Queen is said to have remarked that it “makes Buckingham Palace rather dull”.

Lawyers for Mr. Eskenazi and the sheikh declined to comment.